What problems do fibroids cause?

The majority of fibroids cause no symptoms or problems at all. Indeed, when women see a doctor with symptoms and fibroids are discovered, it is often not clear that the fibroids are causing the symptoms. The commonest symptoms attributable are abnormal vaginal bleeding, feelings of bloating in the abdomen, and pelvic discomfort. Other symptoms sometimes described are pelvic ‘heaviness,’ discomfort with intercourse, frequent passing of urine, constipation, and sometimes problems with fertility or miscarriage. Excessive menstrual bleeding is sometimes the only symptom. Periods may be prolonged and heavy, sometimes leading to iron deficiency. The reasons that fibroids cause heavy bleeding is not completely clear, but it is likely to do with increased size of the uterus, a greater blood supply to the fibroids, disturbance of the normal muscular functions of the uterus, and effects on the glandular lining of the uterus that covers some fibroids. Fibroids rarely cause severe pain, but are more likely to cause pressure symptoms and discomfort. Certainly, small fibroids are a rare cause of pain and women who have marked pelvic pain and small fibroids should be investigated for other causes, such as endometriosis.

Most fibroids do not have any effect on fertility at all. It is estimated that fibroids are the cause of fertility problems in fewer than 5% of infertile couples. Fibroids that project into the cavity of the uterus are more likely to be associated with fertility problems and miscarriage, but this association is complex. The great majority of fibroids cause no problems in pregnancy at all. Some fibroids may increase in size in early pregnancy, but most probably remain unchanged in size or may even shrink slightly in later pregnancy. Some large studies have suggested that the presence of fibroids might increase the risk of bleeding in pregnancy, placental problems such as a low-lying placenta (placenta praevia), or bleeding behind the placenta (placental abruption). The risk of breech presentation (the baby’s bottom being in the pelvis, rather than the head) may also be increased. It is important to note that the great majority of fibroids will not have any adverse effect on becoming pregnant, carrying a pregnancy, and delivering a baby normally.

Although fibroids are tumours (indeed, they are the commonest tumour of women), malignant (cancerous) change is extremely rare. It is likely that no more than one in 500 fibroids will have any malignant component.

When is treatment for fibroids required?

The majority of women will develop fibroids during their lives, and most fibroids cause no symptoms or problems at all. Most fibroids are found during routine medical procedures, such as a Pap smear. When an enlargement of the uterus or pelvic organs is found during a routine examination, it is common to have an ultrasound or other medical imaging test to determine the nature of the enlargement, and this is when fibroids are diagnosed. It is normal to be anxious about any abnormality, and women who are found to have fibroids will seek reassurance that they do not have cancer. Other concerns are whether the fibroids will become larger, whether they will affect fertility, and if surgery (such as hysterectomy) is needed. The great majority of fibroids, if they are causing no symptoms, need no treatment at all. Malignancy in fibroids is very rare, less than one in 1000 in pre-menopausal women, rising to about 1 in 100 in older, post-menopausal women. In young women, fibroids that are growing slowly and do not press into the cavity of the uterus, and where there are no abnormal symptoms such as bleeding or pain, there is no reason to have any treatment for the sake of fertility. Where there is a history of recurrent miscarriage, or difficulty in becoming pregnant, advice should be sought from a gynaecologist.

Uterine artery embolization (UAE) UAE is performed by a properly-trained medical specialist. Using x-rays for guidance, a catheter is passed into the arteries (most commonly in the leg) under local anaesthetic and possibly sedation, and is guided to the blood vessels that supply the fibroids. Small particles that block the blood flow in the vessels are then released, to reduce the blood supply to the fibroids. This is usually performed in a hospital setting, as either a day case or sometimes with an overnight stay. The procedure will usually cause pain for about 24 hours, often requiring pain relief medication. Many women will also develop a low grade fever, a feeling of being generally unwell, and sometimes nausea. UAE can reduce the size of fibroids by up to 50%, with relief of abnormal bleeding and pressure symptoms. Women report being very satisfied by the treatment. Although longer term information is more limited, many women will have a sustained improvement. About 5% of women who undergo UAE will experience complications. Most of these complications are minor, but in less than 1% of cases major complications occur. In about one case in 10, a fibroid will be expelled through the cervix. In a small number of cases, infection occurs and this can be very serious. The treatment is unsuccessful in a number of cases. As many as one in six women who are treated by UAE will ultimately need further treatment, usually a hysterectomy. One area of controversy is the use of UAE in women who wish to preserve their fertility. Newer, experimental techniques, including MRI-guided ultrasound and transvaginal uterine artery occlusion have been described but are still undergoing development and trials and are not mainstream treatments.

Myomectomy ‘Myomectomy’ is surgical removal of a fibroid. This can be performed either at an open operation (‘laparotomy’) or as a laparoscopy (keyhole, or minimal access) procedure. Women who are contemplating surgery for fibroids need to discuss this carefully, and in detail, with their gynaecologist. All of these procedures are safe, but there is always a potential for complications. When myomectomy is performed through a cut on the abdomen (‘open’ myomectomy), there is a chance that hysterectomy will have to be performed. Most women will experience an improvement in their symptoms after myomectomy, but it is important to realize that fibroids will recur in up to 60% of women in the years following surgery. Myomectomy performed during laparoscopy is a more specialized procedure, and studies clearly show that surgical teams who specialize in these procedures obtain good results. In about one operation in 10, the gynaecologist will need to abandon the laparoscopy and complete the procedure as a open operation. Studies of this operation report recurrence rates of up to 25%, and as many as 10% of women will need additional procedures for fibroids in the future.

Hysteroscopic myomectomy In some cases, part or all of the fibroid projects into the cavity of the uterus. The fibroid can be removed using hysteroscopy. There is a risk of approximately one in 100 that the uterus will be perforated. In about one case in eight, the entire fibroid cannot be removed. In about 7% of these operations, the procedure must be completed as an open operation, and hysterectomy has to be performed in about 1% of operations.

Hysterectomy is sometimes performed in the treatment of fibroids. 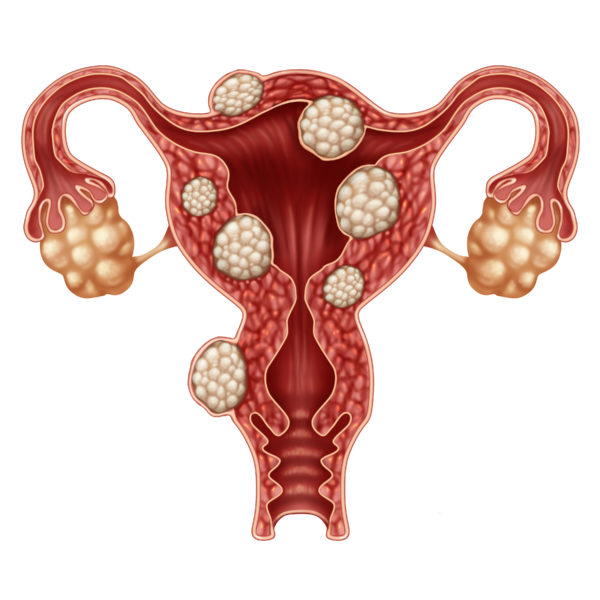